Communication is a basic element within any business organization and this allows the connection of departments, teams and various stakeholders. The organizational process has been using various forms of media to carry out its communication goals. These can now be classified as old and new media. New media denotes various forms of communication that have been newly developed in the electronic world. These forms of media are mainly computer-based and most of them interactive in nature and internet linked. These aspects differentiate these forms of media from “old media” which constitutes of forms of communication such as magazines, newspapers, television and static text or graphics. In the new media field, social media has become a buzz word. Social media constitutes of web-based and mobile technologies which are applicable in the making of efficient and interactive communication. Social media is new media by class, but all forms of new media are not necessarily “social” in nature. This is because some forms of new media lack interactivity that makes the social element. Virtually all industries including the airline industry has embraced the use of social media in their marketing and business processes. This is because these media types allow interactive exchange and allow user-developed content inclusion. Forms of social media include online wikis, internet forums, blogs, social networks, social bookmarking and micro-blogging-just to mention but a few (Communication World, 2010). The use of social media in marketing and corporate external and internal communication has tremendously changed every communication facet in organizations in the airlines industry. The use of social media by airlines was pioneered by airline companies such as Air France and American Airlines (Hameed, 2011). The carriers have the most popular pages on Facebook. The pages allow clients to even select flights on the pages and make click through to the main company sites for the completion of the ticketing transaction.

The Emirates Airlines has also in the recent past adopted a social media use approach for marketing, communication and even crisis management especially in adverse weather conditions. In 2011 Emirates sought a digital agency to develop the carrier’s Facebook  page as the initial step towards developing a ‘social media footprint’ and address its lack of a social media presence (Shearman, 2011).  The move was intended to develop an ‘emotional connection’ with consumers and reach out to the technologically savvy and ‘experienced economy’ which has the school of most recent business travelers. The Facebook initiative will provide a platform for Emirates’ content and a means of making its voice heard and make a channel of greater convenience through which the clients can reach the airline (Shearman, 2011). This social media initiative will also likely enhance the relevance of the brand to a wider audience, thus positioning it as ‘prestigious’ and ‘cosmopolitan’ and increase its customer loyalty. This Facebook initiative was part of the organization’s objective to double in size in a five year period (Van Meer, 2012). In the Facebook category on ‘talking about this’ Emirates came in second in the used metric with 39290 compared to the winner Southwest Airline at 41035. On the ‘Likes’ metric in Facebook Emirates came in fourth with 447965 likes after Southwest, Air France and Jet Blue respectively.

Apart from the use of Facebook Emirates has also engaged the use of other forms of social media such as Twitter. A research by Lets Fly Cheaper (Business Travel Experts) showed that social media marketing (SMM) in airlines was dominated by Southwest airlines, but other carriers were quickly adopting the approach (Lets Fly Cheaper, 2012). The number of Twitter followers for Emirates stood at 20.2, whereas its US followers were 68000. In spite of its successful adoption of the social media strategy, the organizations still lags behind as shown by the two diagrams below. This implies that it has an opportunity of engaging consumers at a better level if it could only improve its social media levels of engagement by increasing the numbers of followers on both Facebook and Twitter. 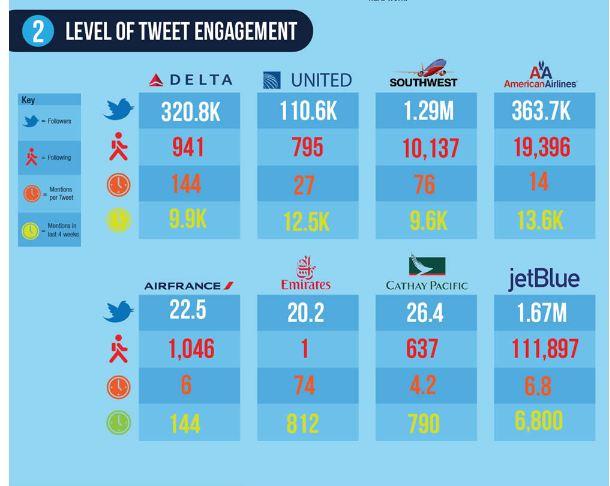 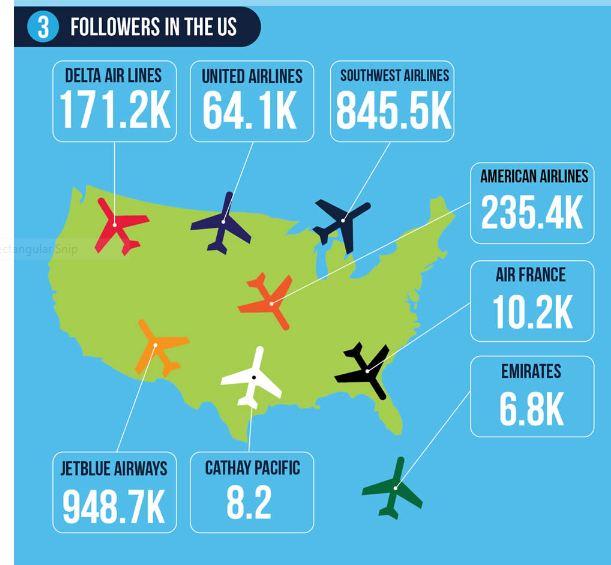 Apart from the popular use of Facebook and Twitter, Emirates Airlines has also ventured into other social media avenues including You Tube, LinkedIn and Mobile Phone booking enabled to operate on different online and mobile telephony platforms (Rahal, 2010). The airline has various LinkedIn profiles on various crew members such as pilots, stewardesses and other players in the airlines operations. The major LinkedIn uniform resource locator is as follows http://www.linkedin.com/company/emirates-airline. The organization has also an exclusive site on which numerous generated You Tube videos can be accessed online by various clients when using the World Wide Web or other electronic access tools on http://www.youtube.com/topic/PJS-pz0-FVY/emirates-airline.

Industry Benchmarking with KLM, American Airline and Air France as per the Lets Fly Cheaper research shows the metrics that are displayed below.

Industrial benchmarking on the above metrics shows that Emirates is lagging behind in terms of the number of Twitter followers, however; it comes first in the Talking about section when compared against KLM, American Airlines and Air France. In the Facebook Likes category the company comes third after KLM and Air France. On average it may be said that the airline has not yet perfected its social media strategic engagement as per the industry’s standard. Therefore, it has room for improvement to a level where it can reach the industry’s big players in the social media application arena such as Southwest airlines (Lets Fly Cheaper, 2012).

Key performance indicators (KPI) denote metrics of performance measured for any organization to determine how well it functions as per an expected performance outcome. These are measurable attributes that should not just offer historical significance, but also the ability to influence a business’ future(Ibis Associates, 2012). The KPIs related to social media strategies may be grouped into Information Technology Indicators, marketing indicators and financial performance indicators. Emirates’ social media pursuit may be evaluated through different KPIs. For example, IT related KPIs may include web hits, site click through, members or followers, service satisfaction and number of business acquisition through respective social media channels. The measure of these indicators shows how well social media will have attained success with respect to IT. On the marketing front KPIs such as sales by social media channel (shows which social media channel contributes to greater sales), percentage repeat purchases, advertising productivity by channel, membership levels which is an indicator of a potential market pool and general consumer satisfaction. On the financial perspective perhaps the returns per channel of approach in social media use is a big determinant of how well the social media application has gained success. The above mentioned are KPIs that can be used to assess the success of the social media application approach by Emirates.

The balanced score card is also applicable in the management and monitoring of performance at Emirates. This managerial tool could be applied at Emirates to assess four aspects recognized by the tool’s framework-financial perspective, internal process perspective, customer perspective and learning and growth perspective. The use of these aspects under the tool’s framework helps in charting a managerial and strategic approach in the application of social media in Emirates’ business operations. The perspectives form a hierarchical flow in which one perspective contributes to the next and finally the ultimate success of an organization. In Emirates’ case the first learning and growth perspective would be aimed at developing and improving the information capital of the organization through providing various online and mobile telephony platforms of information generation, sharing and customer interaction. The internal processes perspective would focus on managing processes, customers and their information through the social media platforms as well as regulating social interactions. On the consumer perspective, this would in turn increase consumer satisfaction and increase market share, which directly translates to higher sales and revenues under the financial perspective. This portrays the hierarchical process through which Emirates can manage its use of social media platforms in various activities.