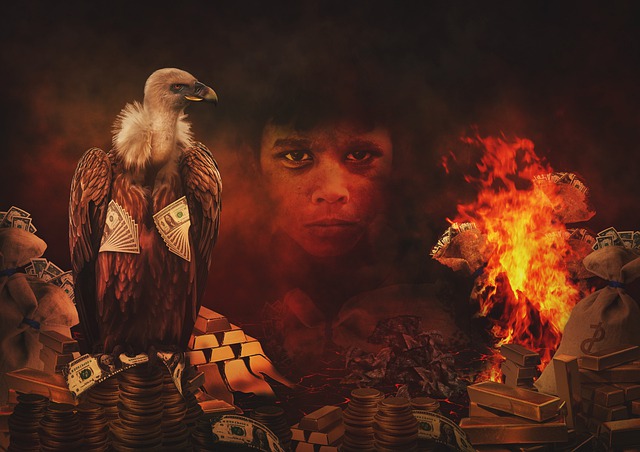 Corporate greed is the unethical pursuit of profit by a corporation at the expense of the well-being of its stakeholders, including its employees, customers, and the community. It is driven by a relentless focus on maximizing profits and shareholder value, often leading to unethical practices such as exploiting labor, engaging in fraud or deceit, or neglecting the impact on the environment.

The damage caused by corporate greed to the U.S. economy will be catastrophic. It will lead to widespread economic instability, as companies prioritize their own profits over the well-being of their employees and communities. It will also contribute to income inequality, as the already wealthy and powerful continue to line their pockets at the expense of the general population. Additionally, corporate greed will erode trust in the very institutions that are meant to serve the public, leading to a further decline in the overall health of our society. The consequences of this greed will be felt for generations to come, as it undermines the very foundations of our nation's prosperity and stability.

The mismanagement of financial institutions due to corporate greed has already led to devastating economic collapse in the U.S. In the past, we have seen major financial institutions prioritize short-term profits over long-term stability, leading to risky financial practices and ultimately, the collapse of the entire economy. The 2008 financial crisis is a prime example of this, as Wall Street greed and lack of regulation resulted in the collapse of the housing market and a ripple effect on the entire economy. The aftermath of this collapse was devastating, with millions of people losing their homes and their savings, and the economy taking years to recover.

If this type of corporate greed continues unchecked, it is only a matter of time before we see another economic collapse in the U.S. Financial institutions will continue to prioritize short-term profits over long-term stability, leading to risky practices and ultimately, the collapse of the entire economy once again. The consequences of this collapse will be catastrophic, with widespread job loss and economic instability affecting the entire population. It is important for regulatory measures to be put in place to prevent this type of greed from damaging the economy again, and for corporate institutions to prioritize the well-being of their stakeholders over their own profits.

Skipping out on taxes

Corporate greed has the potential to seriously damage the U.S. economy through the act of skipping out on taxes. Major corporations have been known to use loopholes and offshore accounts to avoid paying their fair share of taxes, resulting in a drain on the government's resources. This leaves less money available for vital services such as education, healthcare, and infrastructure. In addition, small businesses and individual taxpayers are left to bear the burden of this lost revenue, leading to resentment and a sense of unfairness within the community.

The consequences of skipping out on taxes due to corporate greed are far-reaching and devastating. It contributes to income inequality and the widening wealth gap, as the wealthy and powerful corporations are able to avoid paying their fair share. This further exacerbates the already significant divide between the rich and the poor in the U.S. It also undermines trust in the government and corporate institutions, as citizens feel that they are being taken advantage of and treated unfairly. To prevent the further damage to the U.S. economy caused by corporate greed, it is essential that citizens speak out and demand accountability from corporations and their leaders. Only by standing up to this injustice can we hope to build a fair and prosperous society for all.

One of the most destructive ways in which corporate greed will damage the U.S. economy is through the exploitation of workers. Companies that prioritize profits over people will often cut corners and sacrifice the well-being of their employees in order to increase their own profits. This can take the form of low wages, long hours, and dangerous working conditions, all of which can have a devastating impact on workers and their families. As companies continue to exploit their employees, the U.S. economy will suffer from a lack of productivity and innovation, as workers are too exhausted or unhealthy to perform at their best.

The exploitation of workers will also have long-term consequences for the U.S. economy. When companies prioritize profits over people, they often rely on cheap, disposable labor, rather than investing in the skills and training of their workers. This can lead to a cycle of poverty and job insecurity, as workers are unable to find stable, well-paying jobs. As the U.S. economy becomes more reliant on low-wage jobs, it will become increasingly vulnerable to economic downturns, as workers will have little savings or financial stability to fall back on. The exploitation of workers is a clear indication of corporate greed, and it will ultimately damage the U.S. economy in the long run.

Companies prioritize profits over the well-being of their employees

If companies continue to prioritize profits over the well-being of their employees, it is likely to have significant negative consequences for the U.S. economy. For one, employees who are mistreated or undervalued may become demotivated and less productive. This can lead to decreased efficiency and profitability for the company, as well as a high turnover rate which can be costly to the company in terms of training and onboarding new employees.

Additionally, prioritizing profits over employee well-being can also contribute to income inequality and financial instability for workers. Employees may not receive fair wages or benefits, and may struggle to make ends meet and provide for their families. This can lead to increased financial stress and insecurity, which can have ripple effects throughout the economy as consumers have less disposable income to spend on goods and services. In the long run, this can lead to a sluggish and unhealthy economy.

Corporate greed can also have devastating consequences for the environment. In the pursuit of profits, companies may prioritize short-term gain over long-term sustainability and disregard the environmental impacts of their actions. This can lead to the destruction of natural habitats, pollution of air and water, and depletion of natural resources.

The consequences of environmental destruction can be catastrophic, both for the natural world and for humans. Biodiversity loss, for example, can have serious impacts on ecosystems and the services they provide, such as pollination and water filtration. Meanwhile, air and water pollution can have serious health consequences for humans, including respiratory and cardiovascular problems. In the long run, environmental destruction can also have economic costs, as the damages caused by natural disasters and resource depletion can be costly to repair and mitigate. Overall, corporate greed that prioritizes profits over the environment can have serious and far-reaching consequences for both the natural world and human society.

Monopolization, or the concentration of market power in the hands of a few large corporations, can have negative consequences for the U.S. economy. When a small number of companies control a large portion of a market, they are able to wield significant power over prices and the availability of goods and services. This can lead to higher prices for consumers and a lack of competition, which can stifle innovation and prevent new, potentially more efficient or socially responsible companies from entering the market.

Furthermore, monopolization can also have negative consequences for small businesses and workers. Small businesses may struggle to compete with large, well-established corporations, leading to fewer opportunities for entrepreneurship and job creation. Additionally, the lack of competition can allow large corporations to pay lower wages and offer fewer benefits to workers, as there are fewer options for workers to seek employment elsewhere. In the long run, monopolization can lead to a less dynamic and less fair economy, with fewer opportunities for small businesses and workers.

Price gouging, or the practice of charging excessively high prices during times of crisis or high demand, can have serious negative consequences for the U.S. economy. When companies engage in price gouging, they are taking advantage of consumers who are in a vulnerable position and may have no other options for obtaining necessary goods or services. This can lead to financial strain and hardship for individuals and families, as they are forced to pay much higher prices for items that are essential for their well-being.

Additionally, price gouging can also contribute to a sense of distrust and anger towards businesses and can damage the reputation of a company. This can lead to a decline in consumer confidence and spending, which can have negative impacts on the overall economy. In the long run, price gouging can lead to a less stable and less fair economy, where consumers are unable to access necessary goods and services at reasonable prices.

When corporations wield significant political influence, it can have negative consequences for the U.S. economy. Companies may use their influence to shape policies and regulations in ways that benefit their own interests, rather than the interests of the general public. This can lead to policies that prioritize corporate profits over the well-being of consumers, workers, and the environment.

Furthermore, corporate political influence can also contribute to income inequality and a lack of fair representation in the political process. Large corporations may have more resources to fund political campaigns and lobby for favorable policies, giving them a disproportionate amount of power compared to ordinary citizens. This can lead to a system that is skewed in favor of the wealthy and powerful, rather than being responsive to the needs and concerns of the general public. In the long run, corporate influence over politics can lead to a less fair and less democratic economy.

In conclusion, corporate greed is a major threat to the U.S. economy. It can lead to numerous negative consequences, including economic instability, income inequality, environmental destruction, monopolization, price gouging, political influence, financial mismanagement, skipping out on taxes, exploitation of workers, and mistreatment of customers. All of these factors can contribute to a decline in the overall health and prosperity of our society. To prevent the damaging effects of corporate greed, it is essential that we hold corporations accountable and demand that they prioritize the well-being of their stakeholders over their own profits. Only by taking a stand against greed can we hope to build a fair and healthy economy for all.