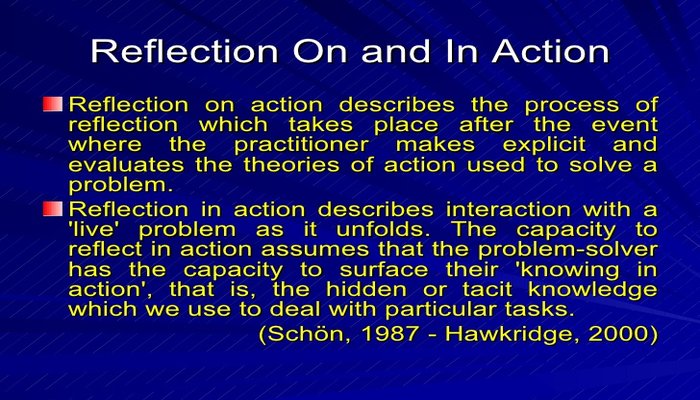 In order to effectively achieve the objectives of reflective practice, several models and theories have been formulated to facilitate the process of reflection. Reflection has, over time, been divided into two main categories namely reflection-on-action and reflection-in-action.

Reflection-on-action refers to the retrospective contemplation of practice undertaken in order to uncover the knowledge used in practical situations, by analysing and interpreting the information recalled (Fitzgerald, 1994). Therefore, it involves looking back after the event has occurred. It involves the turning of information into knowledge by use of a post mortem done cognitively.  It is also believed that this kind of reflection does not only increase one’s knowledge but also challenges the theories and concepts held by a person (Bolton 2004).

In this essay reflection on action is dwelt upon and there is the comparison between two models of reflective practise namely Gibbs model for reflection and Johns model of refection.

This involves the use of several steps in order to achieve successful reflection in practice.

The practitioner at this stage should try to make or evaluate a judgement about what has happened. He/she is also expected to consider and distinguish between that which did well and that which did not.

This stage is also referred to as the synthesis stage and is characterised by the insight development in as far as the behaviour of the practitioner contributed to the outcome of the events. As stated earlier the purpose of reflection involves the learning from experience by a person or a group of people. In order to maximise on the learning opportunities that present themselves during the stages, it is important for ne to perform an honest exploration and carry out a detailed analysis. This will ensure that there is no loss of invaluable information. This stage presents the practitioner an opportunity to ask him/herself that which he/she would have done better

This is the self evaluation stage in which the practitioner questions himself what he/she would have done differently if the event was encountered again.

This is a structured model in which a practitioner is given guidance as he/she aspires to attain a greater understanding of the situation at hand (Johns 1995).  The model is designed in such a way that it is carried out through the act of sharing with a mentor or a colleague and this enables the experience attained by the practitioner to become relevant and invaluable knowledge at faster rate which would be better than if the practitioner had depended on reflection alone.

The model highlights the importance of having an experienced practitioner and one who has the ability to access information and where possible should be able to put in practise after the information has been acquired (Atkins & Murphy 1994).

The model was basically designed for the healthcare environment and involves the use of 5 cue questions that are usually further divided into smaller focuses to promote the very detailed reflection (Kim 1999). The cue questions are based on:

This involves the practitioner seeking conviction from his/her own self by providing answers to questions that require the statement of the aim of the intervention and the manner in which the intervention was done. The practitioner should also evaluate the consequences of his/her actions to those around him/her whether they are the family members (in social development), the patients (in healthcare) or the students (in education) (Carper 1978).

Under this, the practitioner should seek to outline the feelings he/she had during the occurrence of the experience and should compare it with what the recipient (family member, student or patient) was feeling during the same time.

The questions here seek to give information about the various external and internal factors that contributed to the decision making process by the practitioner. This involves understanding the various sources of information or knowledge that might have influenced the making of the decision.

This step involves analysing the source made and the manner in which it was executed. There is an unbiased analysis of the other available alternatives or choices that could have been chosen by the practitioner. Finally the question attempts to analyse the potential consequences that accompany some of the choices that are available.

The questions under this cue aim at illustrating the feelings possessed by the practitioner at the end of the experience. The practitioner is also expected to compare the outcomes in the present experience with those of previous similar experiences.

*As an Amazon Associate I earn from qualifying purchases.