BMW Company is very competitive in the motorcycle and automobile industry. According to Porter (1980), focus generic strategy involves the company targeting a specific market segment, group, individuals, or class of customers. Because of this strategy, BMW produces automobile products that target specific groups in the society or market. It produces motorcycles that serve different classes of people in the market, both rich, middle level and low level income earners. Moreover, it produces automobiles that aim specific classes in the society. Such automobiles are valued differently depending on the quality of the materials and technology used to manufacture them (Kiley, 2004).

BMW has concentrated in using differentiation focus where they design different and unique automobile products that compete with the competitors in the market. Most importantly, the company uses advanced technologies and designs that serve the clientele satisfactorily unlike competitors. Also, the production of motorcycles with different capacities enables the customers to have a variety of choices to make before selecting that which they feel is the best (Kiley, 2004). Additionally, BMW uses cost focus strategy on certain automobiles and motorcycles. They sale the products to specific markets at lower prices than their competitor companies while still making the profits. This is made possible by the reduced cost in the chain of production which finally ensures that the company makes a profit at the end of the tunnel (Kiley, 2004). BWM focuses on different classes of people in their manufacturing of the vehicles, for instance, the 2012 BMW 328i sedan is luxurious car for high class people, and it contains features that make one feel comfortable in the drive. The table below provides a comparison of the 2012 Mercedes C250 sedan with the 2012 BMW sedan (Kiley, 2004). 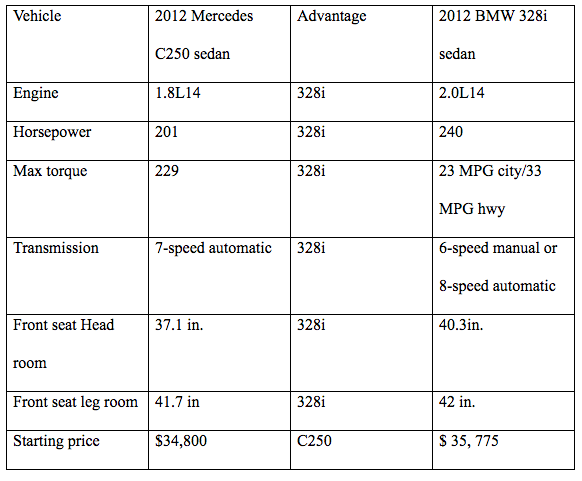 Despite the fact that the price for the BMW 328i is higher, they provide extra services like ultimate driving experience philosophy. The Bavarian car has 2.0 liter turbocharged inline four-cylinder engine that makes a substantial 240 hp and 260 ib-ft torque that overpowers the Benz. The notable BMW luxury models include 7-series which is the highest rank of the BMW classic cars (Kiley, 2004). The E32 version of the &-series with a powerful V12 engine provides the most luxurious car with fax machine and telephone and refrigerated compartment for chilling of wine. The F01 of the seven series that was released in 2008 took BMW to a higher level. It contained 537 hp turbocharged V12 engine the most powerful road car engine provided by BMW. In 2000 SUV model was manufactured as the first X5 sport car. The luxury cars from BMW have been developed along sports cars. Beginning from the sporty 6 series to the most recent 7 series primary sports carline in 2000. In 2008 BMW produced Z8 roster featuring 4.9 liter V8 engine which is the peak for car engines. The developments above occurred because BMW wanted to satisfy the customer needs of luxury cars. The differentiation focus of manufacturing unique cars with different engine capacities as well as cost focus whereby they sell their cars at affordable prices makes BMW competitive in the market (Kiley, 2004).

The figure below shows the price ranges for various competitors of BMW in the 3series market. From the table, Still BMW has the best price ranges since it has the lowest range £16000 (cost reduction focus strategy). This price varies depending on the engine type and motor sport version (differentiation focus strategy) (Kiley, 2004).

From the cases studied above, it can be concluded that a company can easily gain competitiveness in the industry if it selects the best generic strategy. It is better for the company to concentrate on one strategy so that it is not stuck in between the strategies. The mission statement of each company will properly guide its generic strategy selection so that there is good blending of the strategy and the mission statement (Porter, 1980).

Kiley, D 2004, Driven: inside BMW, the most admired car company in the world. John Wiley and Sons.