DeFi’s recent boom has brought a lot of governance tokens in the market. The use cases of these tokens have pushed them far ahead immediately after their launches in most cases. The main idea of this innovation is to benefit the investors and the project alike. This idea is slowly getting traction as most of the DeFi projects are integrating governance tokens to increase their use cases and value.

With aims of brining a fully decentralized economy, the project AmpleForth has released their own governance token in their DeFi ecosystem. A governance token is a tool that not only gives value to a user through its traditional token valuation system but also gives control in the hands of the community. Governance tokens, in general help democratize the growth of a project by allowing the user influence the decisions pertaining to the core protocol. The influence of a user is decided by the number of tokens staked in the project. So, the bigger the stakeholder, the higher the influence. This eliminates any kind of centralization that can affect the idea of forming a decentralized economy. 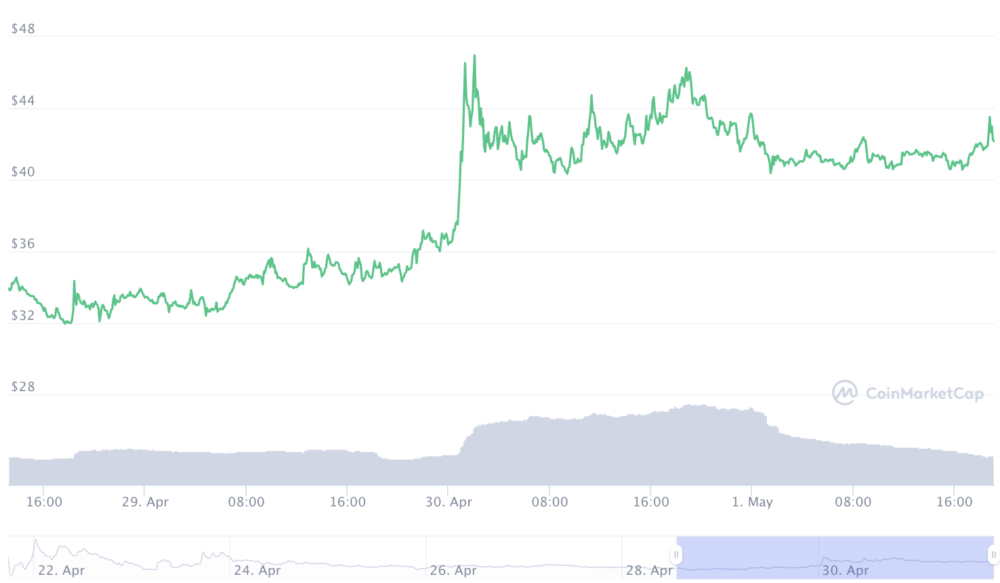 As for the price of Ampleforth’s FORTH token, it has already shown growth potential by climbing from $33 to $48 in a day (April 28th to April 29th). One of the reasons of this stable hike was their launch on Coinbase Pro on 21st of April. Brian Armstrong, the CEO of Coinbase himself has invested heavily in the project. Binance, another huge crypto exchange, also listed FORTH on 23th of April giving it yet another push. Coindesk also recently reported that Ampleforth is giving away governance tokens to users that ever held AMPL (The native token of the project). All the users that fall under the bracket are eligible for claiming their tokens on the website. There are a few core things to understand in the project that will in the long run help Forth go to the moon. This includes the potential of the platform in general. They have their native token that can be called a stablecoin but isn’t quite pegged to a fiat through reserves. Usually, coins like Tether and Dai partner up with central banks to maintain reserves to stick to the peg. On the other hand, Ampleforth has an interesting approach. Once the price of the token’s price exceeds $1, they increase the supply to decrease the price. Similarly, the supply decreases when the coin’s value falls below $1. This makes a brilliant and truly decentralized stable coin. Coming back to the governance token, it is ranked at #255 on Coinmarketcap and can be termed as a low cap coin. The founder of Morgan Creek Digital, Anthony Pompliano recently predicted that the market cap of the overall crypto market will go on to hit $100 trillion. With the overall market cap growing exponentially and even if we suppose linear growth, the market cap of this governance token is projected to hit thrice its current market cap ($258 million). This also puts the price at around $90-$100 mark in the near future.

Historic trends have shown that the utility of governance tokens have helped with rapid growth in valuation. Uniswap, for example, launched its token called UNI later in 2020 which grew around 30x in less than a year. Some governance tokens enhance the utility by giving the users the facility of yield farming as well. This is when you stake a certain number of tokens to get a fixed return on them as a reward for providing liquidity to the system.

All-in-all, the innovation brought by these projects in crypto are gathering a lot of interest of the non-crypto native investors. This is indirectly contributing towards the adoption of crypto in general. This can be seen directly in the steadily increasing market capitalization of the crypto space. Ideas like NFTs, DeFi, dApps, and governance tokens are leading the market to a whole new adoption level. This not only puts the “bubble” concept to rest but also shows the true potential of decentralized systems.