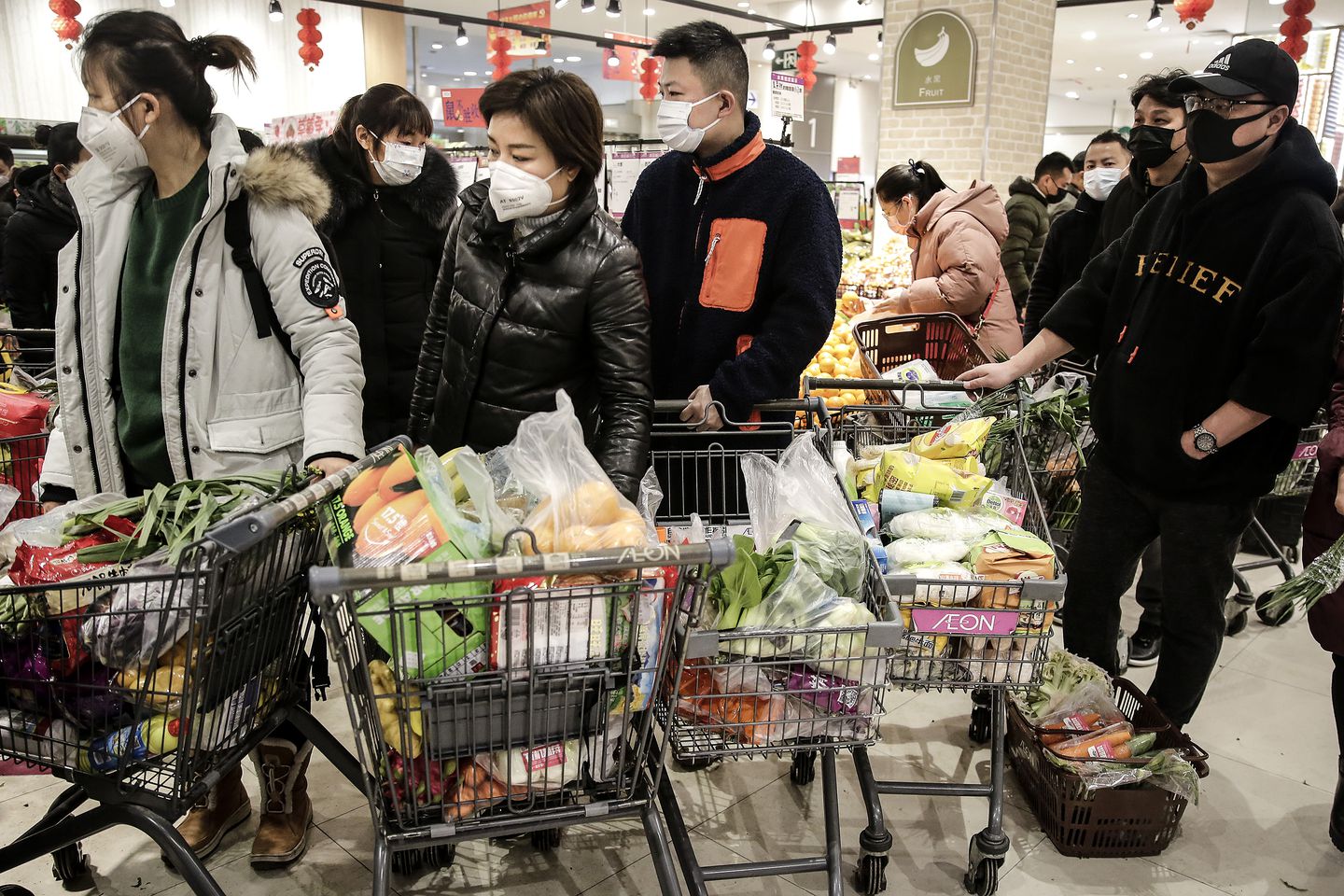 The Wuhan Novel Coronavirus 2019-nCoV or COVID-19 mortality rate at epicenter… A study of Wuhan China suggest death rate among patients who were admitted to a hospital receiving top level medical care is 4.3%. Death rate could be higher for third-world countries and areas where an outbreak limits medical equipment used to increase oxygen support.

The World Health Organization updated global mortality rate to 3.4% whereas an Iranian doctor claimed mortality rate to be 5%. Pathologists have said 40-60% of the world’s population 'could' become infected in the 1st year. If that holds true, 172 million people could die in 1 years time, 450 million could sustain some level of organ damage.

COVID-2019 or Coronavirus mortality rate, termed fatality rate or death rate is defined as ‘the number of deaths in a given area, scaled to a particular population, per unit of time’.

Several different models are being used to calculate the Wuhan 2019-nCoV Novel Coronavirus mortality rate. The World Health Organization (WHO) and several media outlets compare total confirmed cases vs the number of deaths. For example

This method of calculation can be misleading since it does not take into account the number of people who are still awaiting their fate.

People infected vs deaths says nothing. It’s who has finished playing the game.

Mortality rate is the ratio of deaths from COVID-2019 to the total number of confirmed cases, measured over a period of time. It is difficult to measure morality rate because ‘time’ is missing from the equation.

The majority of confirmed cases are awaiting their fate. Until their destiny is known they shouldn’t be included into the equation. Rather, the number of deaths vs people recovered is most important.

Mortality rate will differ depending on the many variables.

Variables are factors that are subject to variation or change and it affects mortality rate. Population density is one such variable.

The richness of a country is another variable. Third-World countries will experience a higher death rate due to a lack of medical practitioners, resources, medical equipment and medications.

Obesity is a variable. Countries that have a high body bass index could suffer most. Obese people have numerous health issues and it weakens the body’s immune system. America is the #1 obese country.

Mortality rate should be scaled to a particular area and size of population.

Since different geographical locations have contrasting mortality rates, the death rate should be scaled to a particular area and size of that population, like a city or town, if possible.

This is especially true if a city becomes quarantined. Strict isolation imposed on a city to prevent spread of COVID-2019 improves data accuracy.

Here is the mortality rate (based on known total deaths vs recovered) for cities or areas with emerging outbreaks of Coronavirus. Death rate percentages will change in time.

Korea has been ranked among the world's top 10 healthiest countries.

A few credible doctors in Iran have said mortality rate in Iran is about 5.0%.

*It's believed that Iran is underreporting numbers and will no longer be updated.

The above video is footage of an Iranian morgue. It shows 50 dead bodies. In Islam dead must be buried in 24 hours. That means Iran is underreporting cases. How many morgues exist in Iran? Are 100s dying daily? Videos are surfacing from Iran that show people dying and suffering in the streets.

Japan has been ranked among the world's top 10 healthiest countries.

Monitoring a manageable version of a larger group is good way to study mortality rate. Observing the mortality rate of Diamond Princess cruise ship passengers could give us an accurate death rate for people receiving top level medical care. Final results could take weeks (4/1/2020). The fate of 379 patients has yet to be determined.

Diamond Princess passengers have received the highest level medical care. More than 35 patients have been listed as critical condition at one time or another. In an environment where medical aid was in short supply or hospitals are overwhelmed, which is happening across the world, it can be assumed that many of those that spent time in the ICU unit could have died. This could drastically increase mortality rate.

Mainstream media and most health organizations determine mathematically the amount of confirmed cases vs deaths to gauge death rate.

The technique can cause percentages to vary over a period of time. At the beginning of the outbreak, Hubei, China health officials worked hard to control the outbreak. Fewer people were infected and doubling rate occurred slowly. Mortality rate during this time would have been more accurate.

As doubling rate sped up, it created a lag time where a large quantity of people’s fate remained undetermined. During this time mortality rate percentage would have decreased.

When the virus peaked in Hubei, meaning the rate of infections decreased, the lag time (the fate of the people) would  have narrowed—causing mortality rate to become more accurate again.

See table above. If the numbers coming out of Hubei China are accurate, 4.46% would be an accurate mortality rate, and it could indicate global mortality rate. However, 17,146 cases exist and their fate has yet to be determined. When fully contained Hubei's estimated mortality rate could reach 5.25%.

What is COVID-2019 long-term mortality rate?

Doctors encouraged the public to take better care of themselves to increase their chances of surviving. They have recommended…

Doctors are encouraging people to live a healthier life because the coronavirus is more likely to kill you if you are unhealthy.

Moreover, some doctors have said that 11% of patients will develop some level of organ damage, such as heart or lung damage. If 11% of the population develop organ damage upon initial infection, will their bodies be strong enough to survive reinfection?

Their greed will be the death of you 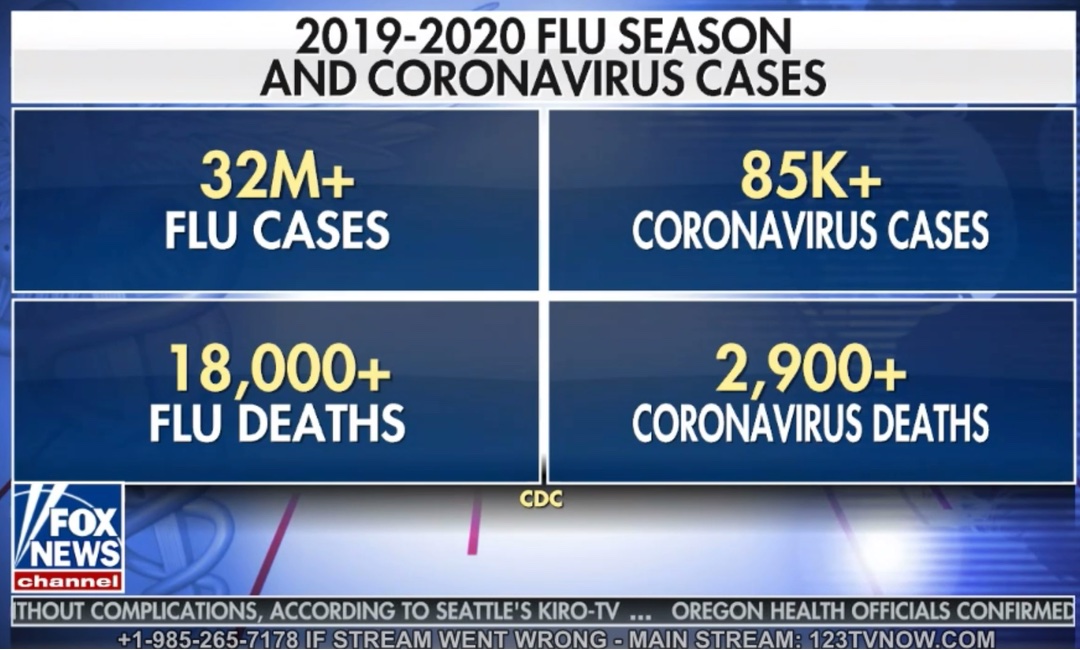 [Above Image] This media outlet tried to compare Influenza to COVID-19. They (corporations and the rich) are worried that if the masses panic, the stock market will crash, and it will lead to civil unrest or worse.

This media outlet attempted to use this image as a way to prove Influenza is more deadly, and of course Influenza has killed more people. It is already established throughout the world.

When COVID-19 has spread across earth, its mortality rate will far exceed Influenza. Bookmark this page and compare the death toll of COVID-19 to that image in one year time. Then hold this enemy of America responsible.

12 thoughts on “What is the Coronavirus Mortality Rate? Worse Than Ebola!”