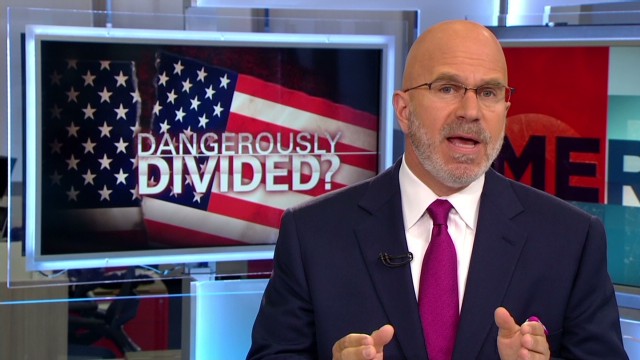 Media is the main means of mass communication for all citizens of the United States. Modern media comes in several different formats but mainly from the transmission of information by radio or television, printed publications or the Internet.

But is the Media dividing Americans? Before we answer that question, what does divide actually mean? Divide is to a separate or be separated into parts to form a boundary between two people, groups or things.  Essentially it is a split meant to break all inhabitants of the U.S. into an organized faction of people who have the same ideology.

Why would media want to divide America? Welp, the reason might surprise you! The media, specifically politically biased opinion media, or news industry, is splitting the citizens of the United States so as to combat the growing trend of cord cutters. That leads us to the next question. What is a cord cutter?

A cord cutter, also known as Pay TV Subscriber, is a person who cancels a cable television subscription in favor of an Internet-based service. 10s of millions of Americans have cut the cord for more than a decade because of expensive cable bills.

While cord-cutting has received a lot of media attention, it hasn’t hurt traditional cable providers, such as Comcast and AT&T. That’s because Pay-TV customers are switching from cable to Internet alternatives.

While cord-cutting hasn’t majorly affected the bottom line for cable providers, cable news outlets took a serious hit. In fact, cable TV network ratings have plummeted as cord cutting grows. This cord-cutting trend is what has given rise to bias, opinion-based journalism.

There are two ways to lead people. You can either divide people or unite them. In political media context, brining people together for a common purpose or action is a terrible idea. Imagine if we all unified and brought an end to money in politics, racism or immigration. We might end up living in a perfect world because we would unify and fix America’s problems.

"In a perfect world, no one would need politically bias opinion media"

If America were free from any flaw or defect we wouldn’t need politically bias opinion media. Aside from a natural disaster or pandemic, there would be nothing but good news. And although we all hope and pray for good news, studies prove that people are drawn to bad news, especially violent and depressing content that produces anxiety. Bad news is addicting.

This is the sole reason why media is dividing America. Cable news ratings have plummeted as a result of cord-cutters. To prevent cord-cutters from taking an even greater financial toll on cable news outlets, media needs America divided on every social aspect.

Divide and conquer is a strategy for achieving control. It is also a legitimate political and military strategy. Merriam Webster defines it as making a group of people disagree and fight with one another so they will not join together against one.

How does media divide

Decades ago news media was kinda fascinating, but not interesting enough to keep consumers paying buck bucks for a cable news subscription, especially with the cost-of-living going up.

But maybe if news was addicting or more like a religion, maybe Americans might become mentally dependent on it and view a cable news subscription more like a necessity. So media invented bias opinion news, also termed fake news, to stoke fear and division in society.

Fake, biased or opinion stories appeal to our emotions in many ways. It can force social pressure upon you to accept a story as being true or important. It has a tendency to interpret information in a way that supports one’s beliefs or values. It’s these emotions that keep us addicted to media.

Jeffery Adam Zucker once said, ‘if viewers only come to CNN when there is a big story, make sure there is always a big story’. Meaning, if you shine the light on bad news long enough, people will become attracted to it. Eventually it can change a persons perception and influence their actions or attitudes.

Since what we consume determines the lives we live, if we are always consuming bad news, we are more likely to project what we see on to others. This ensures a perpetual cycle of bad news.

Why have hate crimes increased? It grew because of the constant focus media placed on Travon Martin, Michael Brown, Eric Garner, Freddie Grey, Alton Sterling etc. Media was highly biased and opinionated so as to invoke emotion from you. They need just one person to act out that violence on camera to create media's next big story.

Is the Internet a Reliable Source for Information?

Have Trump and his Circle Received a COVID-19 Vaccine?

3 thoughts on “Is Media Dividing America?”