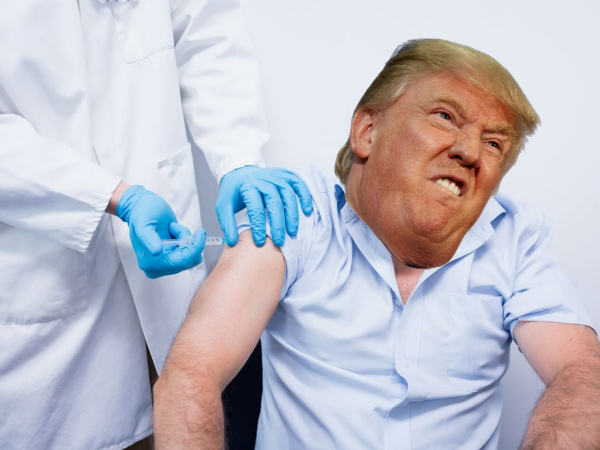 The United States continues to grapple with the COVID-19 Pandemic. As more and more states cautiously reopen, other states are seeing case counts that are growing in an increasingly concerning way.

Even as the United States continues to seemingly struggle with containing the virus, President Donald Trump and those close to him have been able to stave off infection. Even with direct exposure to those that were confirmed to have the virus, no one in Trump’s family or essential staff have tested positive for the virus.

The good fortune of Trump and his associates could be just that, but there is also evidence suggesting that Trump and his essential staff have already been vaccinated against the COVID-19 virus.

"There is evidence Trump was vaccinated against COVID-19 virus"

Dr Anthony Fauci, who has been a leading voice in the country's response to COVID-19, has repeatedly stated that the lengthiest portion of the vaccine development process is testing. But despite Fauci’s insistence on the lengthy timeline, there are already vaccines that have been tested on humans. The early stage trials of those vaccines have already yielded positive results. These trials began as far back as March 16th. The potential vaccine has existed for months.

The President is also famously bullish on possible solutions to the virus. He famously began taking Hydroxychloroquine, a Malaria drug, before any evidence existed that it was effective against COVID-19. The drug was later found to have little to no effect on the virus. It is entirely possible the President would be willing to try a potential vaccine before it had been fully tested.

Trump also operates in a manner that would suggest he is fearless against the virus. He refuses to wear masks and is often seen around people that are not wearing masks. Vice President Mike Pence is often seen not wearing a mask as well. The message the White House hopes the country hears is that the virus is something that can be overcome, and is not as serious as Trump’s opponents, such as the news media, have made it out to be.

Appearing fearless is easy if one is already immune to the virus. Trump could also be motivated to appear as though nothing is wrong in an attempt to jumpstart an economy that before the Pandemic was the pride of his presidency. Since the Pandemic struck, putting millions of Americans out of work the stock market has entered a recession. The President is desperate for American’s to get back to work in the hopes of the economy fully rebounding in time for the November election.

Trump’s apparent bravery against the virus could also be used as a political tool. The Trump would like to portray himself as a fearless leader. One who led the country through a pandemic, while his election rival Joe Biden stayed at home. With the election right around the corner, the President would be looking for any advantage he can get as voters prepare to hit the polls.

Besides the good optics of being secretly immune to the virus would portray, there are more reasons those around Trump would be motivated to try an experimental vaccine. It must also be considered that the potential existed for an enemy of the United States to use the virus as a biological weapon against him. A sense of urgency may have existed in the White House to vaccinate the President before an attempted attack from a foreign country.

The reasons why Trump would want to be vaccinated are obvious. The possible vaccine has existed and been in human trials since mid-March. There also exists the following sound bite. The video clip, which can be viewed below, catches an exchange between two media members. Fox news reporter John Roberts and New York Times photographer Doug Mills.

During the exchange, which takes place in the White House briefing room, the camera captures Mills telling Roberts “Everyone around here has been vaccinated anyway,” Roberts is also not seen wearing a mask during the video. The quote only fueled speculation among those that had already suspected that Trump and those around him had already been vaccinated.

16 thoughts on “Have Trump and his Circle Received a COVID-19 Vaccine?”